The Stijkel Group was a Dutch resistance group that fought the Nazi occupation of the Netherlands during the Second World War. They operated between 1940 and 1942.

In April 1941, forty-three men and four women of the Stijkel Group were betrayed and captured. Thirty-two were murdered in Berlin following a secret trial before a German military court. The others were sentenced to prison camps. Following the war, those who had been murdered were re-interred in Westduin Cemetery in The Hague, and the present monument was erected.


Johan 'Han' Stijkel was the leader of the Stijkel Group. He commanded the group until their betrayal in 1942. He was the first of the group to be murdered in Berlin.

He was one of the first to get a resistance organization up and running in occupied Holland. He had studied English at the University of Amsterdam. Already in his student days he was involved in the resistance against fascism; from Portugal he participated in resistance campaigns against Franco during the Spanish Civil War (1936-1939).

He was an acquaintance of Jonkheer Schorer, founder of the Netherlands Scientific Humanitarian Committee (NWHK), who stood up for equality of homosexuals.

Han Stijkel had contacts in leading circles in The Hague. This enabled him to involve a number of important people in his group. This probably consisted of no more than 80 people, certainly less than the 100 to 150, which Stijkel himself mentioned. It's very likely that at this early stage of the war Stijkel was undertaking the formation and organization of his Group without detailed instructions from London. Later experience was to show the very size of the Stijkel Group should have been a warning sign of its vulnerability to infiltration. Later groups were generally much smaller in number and operated independently of each other in order to make penetration by counter-espionage more difficult.

And the fact is people also underestimated the ability and experience of German counter-espionage, which post-war records were to show had found its greatest successes in Holland. Britain's Special Operations Executive discovered this to its infinite cost later in the war.

Among Stijkel's recruits was Major General S. Hasselman who was responsible for the military part of the Group's work. The Group also included police officers, students, officers, and merchants, among others - of Christian, Jewish, socialist, and other backgrounds. It is clear from an impressive letter from Han Stijkel that he himself acted from Christian-philosophical inspiration.

An active core group was in the Zaan region, in particular in Koog aan de Zaan. These were people from the socialist youth movement AJC, including the director of Honig, the food factory, Mr. and Mrs. Ero-Chambon from the café-dancing establishment De Waakzaamheid, and the owner of the Zwart Garage along with others. The Group's focus was mainly on the collection of military data.

Among other things, Stijkel had been instructed by the Dutch Government-in-exile to create resistance groups throughout the country and organize them into a unit. To that end, he and members of his group traveled extensively with Stijkel using the alias Dr. Eerland de Vries.

During those journeys, espionage data was collected and subsequently passed on to the Westerveld Organization. This work was very difficult in the early stages of the war, because supporting organizations (such as the Personal Evidence Center, which made false identity cards) did not yet exist and safe houses were few and far between. Real beginner mistakes were also made, which in an espionage setting can prove to be fatal in the medium and long terms.

Some information about the group, such as membership lists and weapons, was handled with care. But, as we said earlier, it is almost certain that at this stage of the war, very little training in tradecraft and counter-espionage detection and avoidance had been provided from London. Stijkel had to more or less make it up as he went along.

His counter-infiltration people failed to prevent the extremely dangerous Dutch collaborator spies Van der Waals and Ridderhof (so-called V-Männer) managing to infiltrate into the Stijkel Group, and this proved to be fatal to the Group.

Han Stijkel wanted to receive new instructions from the London government for his activities and he also needed to take a large amount of espionage material to England. His therefore made plans to sail to England for these purposes.

Through a police agent, he came in contact with the brothers Willem and Arie van der Plas, who were fishermen from Katwijk.

With their boat KW 133, Stijkel, together with his right hand men Gude and Baud, both students, planned to sail to a point on the North Sea, where they would be picked up by an English or Dutch submarine. Also a supposed rich Jew would sail with them, as someone who had promised financial support to the organization in exchange for a passage to England.

However, the 'rich Jew' turned out to be a Scheveningen fishmonger who worked for the Sicherheitspolizei (Sipo). Traitors were also found in the police organization that had helped in the chartering of the KW 133 boat.


Consequently everything went wrong with the departure from Scheveningen on 2 April 1941. The exit from the port turned out to be blocked. Although Stijkel, Gude and Baud jumped overboard, they were immediately arrested. After a few days of interrogation, they were transferred to the Oranjehotel. Soon the arrest of another 15 men followed; this number amounted to 47, including 4 women. This rapid rollup speaks volumes as the to extent the Germans already understood about the Stijkel Group.

Again owing to poor basic internal security by a Group member, most of the Koog team was also rolled up and locked up in Scheveningen.

Stijkel managed somehow to continue to act as leader of the Group even though locked up in the Oranjehotel.


After almost a year, the Stijkel Group was transferred to Berlin on 26 March 1942 in its entirety. Here, in September 1942, criminal proceedings were brought against them before the Reichskriegsgericht, the highest military court of Germany. This was a high exception, because almost all arrested Dutch resistance fighters were tried in the Netherlands. The process was conducted in secret. The members of the Stijkelgroep were treated as so-called Nacht und Nebel (Night and Fog) prisoners. The outcome of the trial and the execution remained secret for a long time.

Nacht und Nebel was a directive issued by Adolf Hitler on 7 December 1941 targeting political activists and resistance helpers in World War II to be imprisoned or killed, while the family and the population remained uncertain as to the fate or whereabouts of the Nazi state's alleged offender. Most of those who became victims disappeared in these Night and Fog actions.


39 death sentences were pronounced on 26 September 1942. Six members of the group received grace (disciplinary punishment), one died in prison. Despite major efforts by the Dutch government in London, which asked neutral Sweden to mediate, and by the consul in Berlin, the judgments of 32 remaining members of the Stijkelgroep were upheld. The prisoners then lived for another eight months between hope and fear, but on June 4, 1943, the sentence was carried out at a shooting range in Berlin-Tegel. The 32 members of the Stijkel group were shot at an interval of 5 minutes, Han Stijkel as the first. Both in prison and at the place of execution, Stijkel and his colleagues received a lot of support from the prison pastor Harald Poelchau, who was particularly impressed by the attitude of the Dutch.

In the farewell letter to his father Pipa, Han writes about his transition to another, eternal life:

'If you get this letter, then I have moved from this known and yet so mysterious life to the great unknown life ... Stripped of this material body, which I have always felt as a hindrance, I am where God wills.

Far beyond this earthly existence, above birth and above death is the certainty of the Eternal Empire of the Logos. During my entire stay here on earth I have been aware of that spark of God within me'.

From this sense of eternity, Stijkel also rejects feelings of hate and revenge.

'I did what I thought my job was. The Germans also think the same about themselves.' He sees the power of the Germans, just like Jesus in front of Pilate's judgment seat, as coming from God. 'God always does the very best for all of us, even though we sometimes don't see it yet.'

For a long time uncertainty remained in the Netherlands about the fate of the Stijkel Group. Eventually the 32 murdered members of the Group were found to be buried in a cemetery in Berlin-Döberitz, a district in the Russian sector of Berlin at the end of the war. With the help of the French occupation authorities, the bodies were finally transported to the French sector in Berlin in June 1947 and transferred to the Netherlands from there.

With enormous interest the 32 members of the Group were buried in the Westduin (Ockenburg) cemetery (left) in The Hague.

Prior to the funeral, a memorial service took place in the Grote Kerk of The Hague. Numerous authorities were present, including a representative of Queen Wilhelmina, who showed great interest in the Stijkel Group. 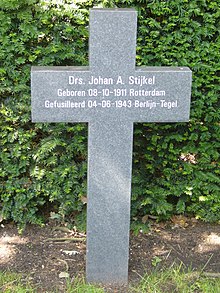 A procession a kilometre long then went through the streets of The Hague to the cemetery.

32 simple wooden crosses and a monument erected later remind us of Han Stijkel and his resistance group. Han's grave is shown on the right.

After the war, many places and streets were named after Resistance fighters. The memory of Han Stijkel and his Resistance group therefore lives on in a number of places in the Netherlands.

We salute the brave heroines and heroes of the Dutch Resistance

If you have additional information or photographs to add to this Obituary please contact us.
We seek to commemorate all and would be pleased to receive your contributions.

Add us to your address book. Click here
© 2012 - 2022 Aircrew Remembered - All site material (except as noted elsewhere) is owned or managed by Aircrew Remembered and should not be used without prior permission.
• Last Modified: 06 April 2021, 16:30 •